Hello!  My name is Joseph Smith…”Joe” for short…and I’m from Florida in the United States.  I arrived at Language Village on October 7, 2014 from Tokyo, where I had lived for seven years.  I am still learning the ropes here, but settling in nicely.  The purpose of this blog entry is to introduce myself, tell a bit about where I come from, and let you know HOW I came to be here.

I was originally born in Iowa, in the United States.  I lived there until I was 11, at which time my family moved to Florida.  I graduated from my high school, located in central Florida, in 1999.  Afterwards, I moved to Tallahassee, Florida, where I attended Florida State University and dual-majored in Creative Writing (writing essays, fiction, poetry, etc.) and Psychology.

In my third year in college, I decided to join a study abroad program to Japan.  That summer, I came to Tokyo with a group of about a dozen other students and studied business classes at Nihon University.  This was my first time in Japan, and I had the time of my life.  We visited various interesting places, including touring Tsukiji fish market, spending the weekend at a hotel near Mt. Fuji, touring the Japanese parliament building, touring a Kirin beer factory, as well as a Honda engine factory, and made many lasting memories and friendships during that six week period.

After I graduated from FSU in 2005, I decided that I had three options…I could either get a job, go to graduate school, or go overseas and have an adventure.  I decided on the latter, being a bit of an adventurer, and spent one year working at a newspaper in Florida while I applied to a school in Tokyo and got my visa in order. 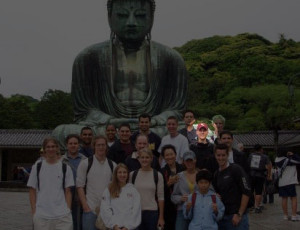 I came to Tokyo in 2006 as a language student.  I studied Japanese intensely for one year at a school near Shinjuku in Tokyo.  After this, I worked at a few various jobs, including time doing advertising sales as well as recruiting for financial positions.  Eventually, I came around to teaching English because I was pretty good at it, it was less stressful, and it gave me time to pursue some of my other interests…namely audio production and audio engineering projects.  Two years ago I mixed the audio for a full-length Japanese-language movie as the lead audio designer (This movie was picked up by a producer and will FINALLY come out this year!  But they changed the name, so I don’t know what it will be called yet.)  Last year I started working with a Japanese rock band and produced their album.  I enjoy doing such projects in my spare time. 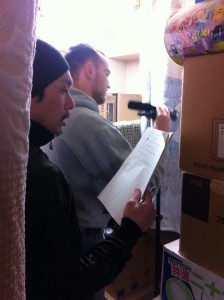 So while I teach during the day now at Language Village and enjoy speaking with and teaching the students who come here, when I have some spare time I am often in my room working on my own music or trying to make music that my friends have made better.  I also enjoy playing tennis, so perhaps if you come out to Language Village, we can find some time to hit the tennis court!